Who is David Oulton?

David Oulton is an actor, talk show host, a realtor by profession, and Canadian by nationality. Aside from working with luxury real estate business Charles Real Estate, he is well known for starring in Guns of Purgatory, Fargo, Galaxy Trek, and as the host of a weekly talk show Face to Face with David.

David Oulton’s birth took place on May 7, 1993, in Chester, Cheshire, England, and grew up in Fort McMurray, Canada, having relocated there at the age of five. Although he has not revealed the identity of his biological father, mother, and siblings, it is known that he left home at the age of 17 and cut ties with his biological family.

In 2009, Oulton was legally adopted in his adult years by executive film producer Lisa McGillivray. The Shaw Spotlight documentary Choosing Happiness (2018) focused on the story of his adoption and following events. Through his adoptive mother, he has a sibling, a brother named Kyde. For education, David Oulton attended Capilano University in Vancouver and the University of Calgary for a Bachelor’s of Communications. Well before high school graduation, Oulton had earned a certificate in Acting for Film from the New York Film Academy’s Los Angeles campus.

The actor is very private when it comes to sharing details about his romantic relationships and dating life. There have been no records of him dating anybody in the public eye. Currently, David Oulton is believed to be a single sans girlfriend. David Oulton as The Kid in Guns of Prugatory  (Image: Instagram)

Oulton’s debut TV role was in an episode of Disney’s Hannah Montana while his debut film role was in a 2010 film. Over the years he has portrayed character(s) in Guns of Prugatory (2016), The Agreement (2017), Galaxy Trek (2015), and Fargo.

Recently David Oulton has starred in the films Midnight Fever and From Hell With Love, which are both set to be released soon. Moreover, the budding star will be hosting the upcoming weekly talk show Face to Face with David.

In addition to acting David Oulton also works as a realtor, having obtained his real estate license in the fall of 2017. Based in Calgary, Canada he sells luxury real estate with Charles Real Estate all the while dividing time between his real estate career and an acting career in Los Angeles.

In April 2020 Oulton reportedly donated $10,000 worth of clothes via multiple organizations to fellow Calgarians affected by the Covid-19 pandemic. 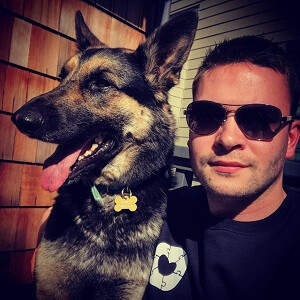 The net worth of David Oulton is estimated at around $1 million while the figure on his annual salary is under review.

On social media handles including Instagram, Twitter, and Facebook, David Oulton is followed by thousands of followers and counting. He often shares glimpses of his daily life with his German shepherd Khloe, workdays, and family events. He also has an official website - davidoulton.com.