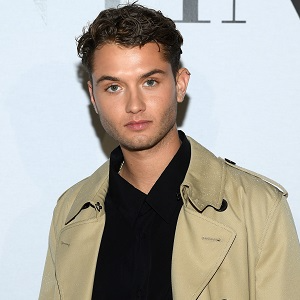 Who is Rafferty Law?

Rafferty Law is a model, actor by profession, and British by nationality. He is the son of famous British actor Jude Law and actress, fashion designer, and producer Sadie Frost.

Rafferty Law’s birth took place on October 6, 1996, in England, UK. He was born as Rafferty Jellicoe Frost Law to father Jude Law and mother Sadie Frost, who are both British actors. Other details of Rafferty Law’s early life including that of his childhood and high school education are well kept from the public.

Rafferty Law was in a relationship with Ella Dallaglio, the daughter of rugby player Lawrence Dallaglio. He was also rumored to be dating Molly Moorish, daughter of English rock band Oasis’ Liam Gallagher. Law also dated Clementine Linieres for a year and a half.

In late December 2019 Rafferty Law was reported to be dating 29-year-old British singer Rita Ora. He and his girlfriend were spotted together at numerous events together and had first met while filming the movie Twist. In February 2020 the pair broke up.

It might be years before Law decides to marry, take a wife, or decides to have children. Law started his career as a runway model in June 2014. His debut catwalk was for DKNY and was represented by the famous model agency Select Model Management. Currently, he is represented by Tess Management, a London-based agency that represents individuals in fashion, TV, music, or advertising.

Over the past few years, Rafferty Law has walked the ramp for brands such as Dolce & Gabbana, Timberland, and Dior.

In addition, Law is also a musician. He is a member of the band Outer Stella Overdrive along with three other members. Rafferty Law was a guitarist and vocalist alongside Marley Mackay, the son of Pulp bassist Steve for a band named The Dirty Harry’s. He also loves DJing in his spare time.

Also read: Alexxis Lemire - Actress of The Half of It (film) In an interview with Evening Standard, Law had said that he is in no rush to get into acting. Now he is slowly transitioning into acting.

After appearances in a series of short films, he was cast in Sky Cinema Oliver’s remake Twist (2020) as a penniless artist and street painter Oliver Twist. Rafferty Law also said that he was keen to impress the experienced cast, having worked hard in the two months prior to filming.

Also read: Daniel Diemer - Actor famed for The Half of It (film) Both figures on the net worth and annual salary of the budding star Rafferty Law are under review and will be updated.

On social media, Rafferty Law is active on Instagram with over 45.6 k followers and counting but is absent from other handles such as Twitter and Instagram.

Also read: Christopher Meyer - Actor of All Day and a Night (film)