Who is Ronny Chieng?

Ronny Chieng is an actor, comedian by profession, and Malaysian by nationality. He is currently a senior correspondent on The Daily Show on Comedy Central and is well known as the creator of the sitcom Ronny Chieng: International Student in which he also starred.

Ronny Chieng was born on 21 November 1985 in Johor Bahru, Johor, Malaysia. His birth name is Ronny Xin Yi Chieng and born into a Malaysian Chinese family. His parents raised him alongside his sibling, an older sister in both Singapore and Manchester, New Hampshire, USA. The name of his mother and father (who passed away in Jan 2019) is not known, although he often features them on social media. Ronny Chieng with his parents and sister - pictured May 1988 (Image: Instagram)

For education, Chieng has attended numerous institutions. In Singapore, he attended Fuchun Primary School, Pioneer Secondary School, and Pioneer Junior College. He went on to study at the University of Melbourne, graduating in 2009 with a Bachelor of Commerce (Finance) and Bachelor of Laws degrees. Ronny Chieng obtained a Graduate Diploma in Legal Practice from the Australian National University in 2012.

His ethnicity is Malaysian and Chinese.

Ronny Chieng married his longtime girlfriend Hannah Pham on September 9, 2016. His wife is Vietnamese-Australian. There is no news of their pregnancy, childbirth, or divorce. Chieng’s early appearances were in the episode(s) of the TV series Problems (2012), Legally Brown (2013-2014), and Have You Been Paying Attention? (2013-2014), etc. In 2013 he performed with Trevor Noah at a comedy festival in Melbourne, Australia, and two years later he was invited to audition for the correspondent role on The Daily Show which was hosted by Noah.

Following his breakthrough role on The Daily Show with Trevor Noah as a correspondent, he went on to star in the films Crazy Rich Asians (2018), Godzilla vs Kong (2021), Shang-Chi and the Legend of the Ten Rings (2021), Super Simple Love Story, to name a few. Other TV series in which Ronny Chieng has portrayed roles include Ronny Chieng: International Student (2017, also a creator), and Scissor Seven (2018-present), among others.

On the set of Shang-Chi and the Legend of the Ten Rings, Ronny Chieng has worked with Florian Munteanu, Benedict Wong, and Rosalind Chao. 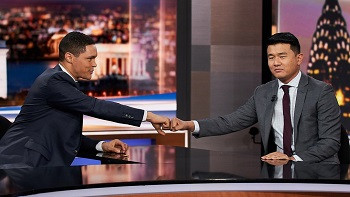 The net worth of Chieng is estimated to be around $3 million while the figure on his annual salary is under review.