Who is Sam Lavagnino?

Sam Lavagnino is a child voice actor. He is well known for lending his voice in Bravest Warriors as Catbug, in We Bare Bears as Young Grizz, in Puppy Dog Pals as dog Rolly, and in the YouTube series asdfmovie as Mr. Muffin.

Sam Lavagnino’s birth took place on June 29, 2006, in the USA. His mother is voice actress Hope Levy and his father is screenwriter Tom Lavagnino. He took his parent’s career path from a young age. Not much is known about his siblings or if he has any. Sam Lavagnino is still in school. In August 2017 his mother shared on Instagram that he has started middle school. His ethnicity is English and Irish.

Although Sam Lavagnino is in his teens, he is considered a few years shy from starting his dating life or involving in a romantic relationship. He is currently focused on his career and school rather than having a girlfriend. Lavagnino’s first work was at the age of 14 months. He was on the cover of TIME magazine dressed up as Albert Einstein.

Years later he took in his parent's footsteps. His debut role as a voice actor was in the children’s show Bravest Warriors as Catbug. He worked in the series from 2013 to 2018. 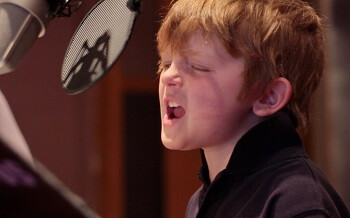 In March 2020 Sam Lavagnino was presented with a gold album for his voice work on Tomska & The Gregory Brothers - The Muffin Song. The net worth and annual salary of Lavagnino are under review and will be updated.