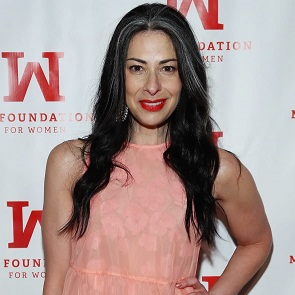 Who is Stacy London?

Stacy London is a stylist/fashion consultant, author, and magazine editor by profession and American by nationality. She is best known for co-hosting What Not to Wear and fashion reporting for Access Hollywood, The Early Show, and The Today Show.

Stacy London’s birth occurred on May 25, 1969, in New York City, New York, USA. She was born to mother Joy Weinman, a venture capitalist, and father Herbert London, the president emeritus of the Hudson Institute. Her stepmother is Vicki Pops, a romance novelist.

London is not the only child of her parents and has two siblings- sisters Jaclyn London and Nancy London. young Stacy London with her siblings, and father (Image: Instagram)

After graduating from high school, she went on to study at Vassar College. There Stacy London double majored in 20th-century philosophy, and German literature and interned in Christian Dior's Public relations department in Paris.

Her ethnicity is Sicilian from her mother’s side, and Jewish from her father’s side.

For most of her life, London had been dating men. In 2003 she was engaged to Mark Riebling, writer and editorial director of the Manhattan Institute for Policy Research. They did not get married but ended their engagement a year later.

Since then she has had several romantic relationships and boyfriends but has kept her personal life as private as possible.

However, on December 31, 2019, Stacy London revealed that she has been dating Cat Yezbak on Instagram. She and her musician girlfriend have been dating for over a year. London began her career working at Vogue magazine as a fashion assistant. She eventually became the senior fashion editor at Mademoiselle and went on to style photos for Italian D, Nylon, and Contents.

From 2003 to 2013 Stacy London co-hosted What Not to Wear with Clinton Kelly and teamed up with her in 2005 to write a book Dress Your Best.

She is the creative director for Westfield Style and the editor-in-chief of Westfield STYLE magazine and has been hosting Love, Lust, or Run since January 2015.

Stacy London has co-founded Style for Hire with Cindy McLaughlin. Moreover, she has worked on a campaign with brands such as Hanes, Wonderbra, Bali, Procter & Gamble, Calvin Klein, Pantene,  Woolite, Dr. Scholl's, and Lee. Stacy London has worked as a stylist for many celebrities including Kate Winslet, and Liv Tyler, and fashion designers Rebecca Taylor, Ghost, and Vivienne Tam.