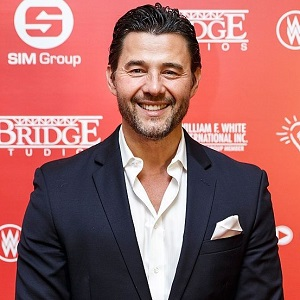 Who is Steve Bacic?

Steve Bacic is an actor by profession and a Croatian, Canadian national. He is best known for starring in Gene Roddenberry's Andromeda as Gaheris, Telemachus Rhade and in Hallmark movies All For Love, A Christmas to Remember.

Steve Bacic’s birth took place on March 13, 1965, in Lisicic, SR Croatia, Yugoslavia. He was raised in Windsor, Ontario, Canada. Other details of his early life including that of his mother, father, siblings, or the profession of his parents are not known. Bacic graduated from a university with an honors degree in kinesiology with a minor in Math. His ethnicity is Croatian.

Steve Bacic is a happily married man and had married his longtime girlfriend Carolin Bacic. Although he has been married to his wife for years, he is yet to share the date of his wedding.

The couple has three children together- the older two are a son and a daughter while the gender of his third baby is not known. As of 2020 the couple is in a blissful marriage and is living without rumors of extra-marital affairs and divorce. Bacic had initially wanted to become a professional athlete, coach, or physical therapist. After completing his education he held a factory job and also had his own auto refurbishing business. At the time he also owned two houses.

However, the perspective of his career path changed when he was in his mid-20s.

While on a trip to Vancouver, British Columbia with his friends, he got intrigued by the TV and film production going on there. Having stayed there Steve Bacic took acting classes and eventually started his career as an actor in 1991.

Over the years Steve Bacic has starred in numerous TV series as well as films. Steve Bacic in the 2017 TV film All For Love (Image: Parade)

For his role in The Guard, Steve Bacic was nominated for 2008’s and 2009’s Leo Awards - Best Lead Performance by a Male in a Dramatic Series.

Bacic’s net worth has been estimated to be around $2 million while the figure on his annual salary is under review.