Who is Timothy Olyphant?

Timothy Olyphant is an actor and producer. He has been active in theatre and TV since 1996.

Timothy Olyphant’s birth took place on May 20, 1968, in Honolulu, Hawaii, the U.S.A. as Timothy David Olyphant. His mother is Katherine Gideon and his father is J.V. Bevan Olyphant, vice president of production at Gallo Winery. He has two siblings- an older brother named Andrew Olyphant, now an A & R executive for Warner Bros, and a younger brother named Matthew Olyphant, former lead singer for Fetish.

When Timothy Olyphant was two years old, the family moved to Modesto, California. All three boys were raised there. Growing up, he competitively swam and even reached the finals of 1986’s Nationals in the 200m Individual Medley.

In the beginning, he had hoped to study architecture but due to his busy training schedule, Olyphant opted for a degree in fine arts and theater. He graduated in 1990 and was the classmate of Will Ferrell and Macy Gray. He thought of earning a master’s degree in fine arts while working as a swimming coach at Irvine Novaquatics. Instead, he moved to New York to pursue his career.

Timothy Olyphant began a relationship with his girlfriend Alexis Knief, his college sweetheart. Olyphant was 23 years old when he married her in July 1991. The couple has three children together.

Their first child, a daughter named Grace Katherine Olyphant was born in 1999. Olyphant’s wife gave birth to their son Henry Olyphant in 2001 and daughter Vivian Olyphant in 2003.

Currently, the family resides in Westwood, Los Angeles, California, United States. The husband-wife is living in a blissful marriage which no rumors of divorce or affairs. 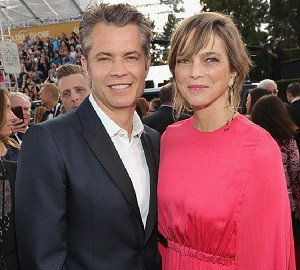 While in school, Timothy Olyphant loved drawing and art but was “embarrassed” by the idea of acting. And while in College, he did think of pursuing commercial art as a career. After moving to New York, Olyphant he began working as a stand-up comedian.

In 2004, Timothy Olyphant was cast as Sheriff Seth Bullock in HBO’s series Deadwood which ran from 2004 to 2006, and is also considered his breakthrough role. The series was reprised again in 2019, in which he is also an executive producer. In Coastlines (2006), he starred alongside Josh Brolin.

In addition to being a successful actor, Olyphant is also a tennis player. His net worth has been estimated to be around $20 million while the figure on his annual salary is under review.

Also read: Julia Butters - Child Actress of Once Upon a Time In Hollywood