Cari Cucksey is a TV host, Antique dealer by profession, and American by nationality. She is well known as the host of HGTV’s Cash & Cari and owner of RePurpose Estate Services.

Cari Cucksey’s birth took place on June 5, 1975, in the USA. Not much is known about her father and mother (a teacher), except she inherited her mother’s passion for antiques and collectibles. She is not the only child of her parents and has a sibling, an older brother. For education, Cari Cucksey graduated from Fenton High School in 1993. She went on to study at Central Michigan University in 1998.

Cari Cucksey married her longtime boyfriend Vincenzo “Vince” Iafano on June 16, 2012, after years of dating. She has a daughter named Orion (born June 2016) with her husband. Currently, the pair seems to be happy in their marriage and raising their only child. Also, there are no rumors of divorce or affairs surrounding the couple. 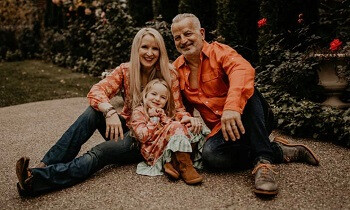 Cucksey’s love for selling, trading, and buying antiques began when she was 12 years old. She has also been working as a professional estate liquidator for over 10 years. She travels across America in search of the oldest and most unusual items to sell or restore.

Cari Cucksey is the owner of RePurpose Estate Services, which she also operates. The business, which was launched in Northville in 2010, is based near Detroit, Michigan. With her professional team, she sets up estate sales right on her clients’ premises where she unearths everything of value.

The shop first started out as a retail storefront and an estate sale business but has now grown to include two event venues, a chapel, accommodations, a café, and soon a beer garden.

She gained fame after she began to host HGTV show Cash & Cari. It also airs on the W Network, Choice TV, and the History Channel in countries around the world. The show follows Cucksey and her company, RePurpose Estate Services. The show premiered on February 4, 2011, and ran for three seasons. Its final episode was aired on August 20, 2013. The show however reruns in over 40 countries.

She also has authored her first book- Antiques Matchmaker: How to find, repurpose and fall in love with secondhand treasure. The net worth and annual salary of Cari Cucksey are under review and will be updated.