Who is Jodie Sweetin?

Jodie Sweetin is another child actor who grew up right in front of the camera. Since the age of 5, she has portrayed the role of Stephanie Tanner in the hit sitcom Full House. With her decade-long absence from Hollywood, she is back to reprise her role in Fuller House. What did viewers miss out on? Read more to know.

Jodie Sweetin was born on January 19, 1982, in Los Angeles, California, U.S.A. Both her biological parents were in prison at the time. Her mother struggled with drug addiction while her father was killed in a prison riot.

She was raised by her uncle Sam Sweetin and his second wife Janice and was not formally adopted until she was two years old because her biological father was one-fourth Native American.

Sweetin’s uncle raised her as an only child. Sweetin’s uncle and aunt started to look after her when she was 6 months old and she did not find out about the adoption or biological parents until decades later. She does not have any siblings. She attended Los Alamitos High School and graduated from same in 1999. Jodie Sweetin then went on to attend Chapman University where she studied Liberal Arts, graduating in 2005.

Jodie Sweetin dated Los Angeles Police officer Shaun Holguin. She married her boyfriend Holguin on 27 July 2002, at the age of 20. The wedding was attended by close friends, colleagues, and family. Sweetin’s co-star Candace Cameron served as the matron of honor. All seemed to be fine between the couple but they announced their divorce on 23 February 2006.

A year later, she met Cody Herpin, a film transportation coordinator, and started dating him in May 2007. Only 2 months later, they tied the knot on July 2007. The couple was blessed with a daughter named Zoie Laurelmae Herpin on April 12, 2008. This marriage too did not last and their divorce was finalized on April 20, 2010. 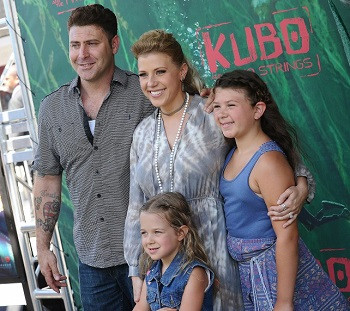 Shortly after Jodie Sweetin’s second divorce, her representatives confirmed that she was pregnant with her boyfriend Morty Coyle’s child. This was only 10 days after the divorce was finalized! Their daughter was born on August 31, 2010, and named her Beatrix Carlin Sweetin Coyle. In January 2011, the affair turned into an engagement.

Sweetin and Coyle married on March 15, 2012, in Beverly Hills. Only a year later, in June 2013, she filed for divorce which was finalized on 6 September 2016. Like many other divorces, their divorce was long and nasty. The actress was ordered to take a drug test and pay ex-husband Coyle $2,800 per month in child support until Beatrix Carlin Sweetin-Coyle turns 18, marries, dies, or becomes emancipated.

Sweetin dated Justin Hodak, a recovering drug addict, and announced their engagement on January 22, 2016. But they soon separated on March 24, 2017.

Currently, she is dating Mescal Wasilewski, which she announced on Valentine’s day of 2018. A source added that they had been dating since November 2017. The couple got engaged in January 2022. She also did some acting while in high school. She had performed a musical with actor Matthew Morrison. Sweetin later shared that she was told not to talk about her adoption publicly so that people would think she was forced into acting.

Years after, she finished college and returned to Television as a host of the Fuse dance competition show Pants-Off Dance-Off. Jodie Sweetin also starred in Small Bits of Happiness, Port City (2009), Redefining Love (2009), Can't Get Arrested (2011), Singled Out (2012), Hollywood Darlings (2017).

In 2015 it was announced that she would reprise the role of Stephanie Tanner in the Full House spin-off series Fuller House. On March 2, 2016, it was announced that Jodie Sweetin will compete on Dancing with the Stars for season 22. She was partnered up with professional dancer Keo Motsepe and they finished up in sixth place. Sweetin revealed she started to drink alcohol when she was just 14 years old, shortly after Full House wrapped. She soon started to use ecstasy, methamphetamine, crack, etc for the next 15 years.

In a guest appearance on Good Morning America on February 1, 2006, she talked about her addiction to meth, which shocked her fans. She finally got sober in 2008.

In 2009, she published a memoir called unSweetined. In it, she wrote about growing up in front of the camera, drug abuse, and getting sober. She wrote, “I probably had two bottles of wine, and I was only 14. That first drink gave me the self-confidence I had been searching for my whole life. But that set the pattern of the kind of drinking that I would do. At the time I started doing the hard drugs, the methamphetamine and coke and stuff, it was a lot easier to hide than drinking.”

She also wrote about the time when she almost accidentally killed her daughter followed by an investigation by child services,

“That was the big rock bottom. I not only put myself in danger but also my daughter, who I loved more than anything. I felt terrible."

Now, she is a clinical logistics coordinator at a Los Angeles drug rehab center, having completed a degree as a drug and alcohol counselor. Source: popculture (Jodie Sweetin on the set of Fuller House)

The net worth of Sweetin is estimated to be around $2 million while her monthly salary/income is $700 thousand.